Flower of the week – Gladiolus 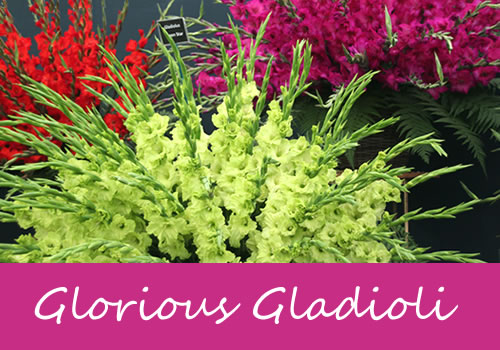 Colours: virtually all colour except blue.  Pale pastels to vibrant reds and purple, some bi-coloured also.

Gladioli get their name from the Latin word Gladius, which means sword, due to their sword shaped leaves.  They are bulb flowers that produce a single flower spike and several narrow leaves.  There are 260 species of gladioli, nearly all of which are native to Sub-Saharan Africa.  In the wild the gladioli vary greatly  in size and the number of flowers.  The gladioli you see in florist shops today has been hybridised to produce giant ornamental varieties. 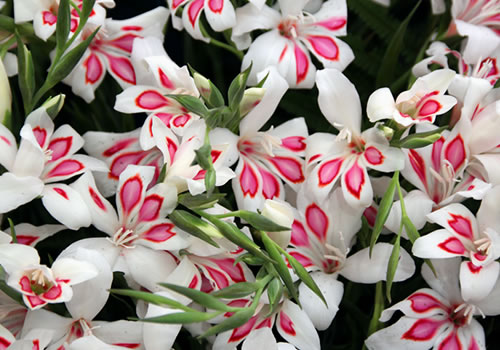 Smaller varieties like the one pictured above are often referred to as bridal gladi, they are used in wedding flowers as the dainty heads are a perfect size for bridal work.  Gladioli last well as cut flowers, they have become trendy again in recent years after suffering from an image problem.  Dame Edna was famous for having gladioli and may have contributed their old fashioned image.  They come in so many gorgeous colours there is no need for them to look past it.  Some of my favourites include a deep purple variety that looks almost velvety black and a bright acid green shade. 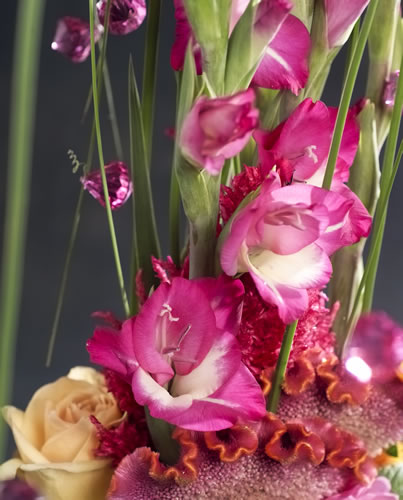 They are mainly a summer flower available from May to October, though sometimes the season is longer.  A few gladioli look good peeking out above other flowers in a mixed bouquet or a full vase of gladioli in a single colour is glorious when open. They are usually bought closed or a few bottom flowers open, they should not be bought fully open.

Gladioli are often available as locally grown British flowers in the summer months.  To encourage the whole stem to open, the very tips of the flowers (two or three buds) can be gently removed.  Gladioli are thirsty flowers; make sure they are placed in deep water.