The royal wedding is only a few weeks away now and the whole country is eagerly awaiting the big day. We brits don’t need much of an excuse for a party, but a royal wedding is as good a reason as any. Admittedly, for some the excitement is due to an extended break from work, tagging the Easter holidays onto the royal wedding weekend.  But I can’t wait to see what Kate will choose for her flowers and dress.

It has been banded about that Prince William and Kate might decide to go for British flowers, which would highlight the gorgeous cut flowers we can produce in Britain.  It’s a little early in the year for some British grown flowers, so they would be limited to spring pretties if they did choose to stick with just home grown flowers.  I would love to see William and Kate go for British flowers, and a selection of spring flowers would be beautiful.  Tulips, anemones, hyacinths, narcissi and lily of the valley are all available in April. 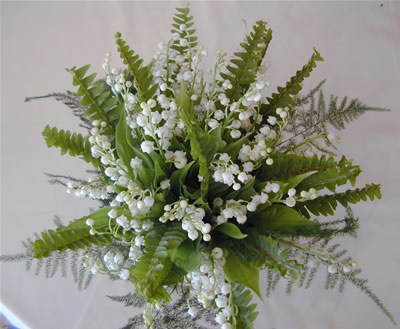 When Camilla married Charles, Prince of Wales in 2005, she carried a pretty wired posy of lily of the valley and primroses for her bouquet.  The wedding was quite low key and her petite bouquet reflected this.  It included some Myrtle from Queen Victoria’s Garden on the Isle of Wight. Queen Victoria included a sprig of Myrtle in her wedding bouquet and then planted the Myrtle in her garden afterwards.  Since then all royal brides have included Myrtle in their bouquets including Queen Elizabeth II and Diana, Princess of Wales.  Myrtle is said to be the herb of love and is thought to bring good luck.  It is expected Kate will include Myrtle in her bouquet too.

Kate’s flower choices will obviously depend a lot of the type of dress she wears.  If she picks a fairy tale style dress with a large full skirt she may choose a trailing shower bouquet to balance the dress.  This type of bouquet is usually thought of as more traditional.  Shower bouquets have seemed to be out of fashion for many years as handtied bouquets were so popular.  But teardrop shape bouquets have been making a comeback recently, either as a smaller more compact version with a lot less fussy foliage or as a very modern waterfall design constructed on a decorative wire base with minimal flowers wired on. 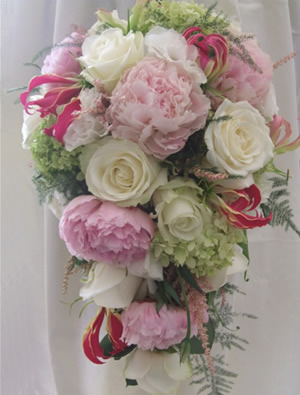 My bet for Kate’s flower style is understated elegance.  I think she will go for a teardrop shaped bouquet in neutral colours, not a large bouquet with long foliage like Princess Diana had, but a simpler contemporary version.  Most spring flowers are not very well suited to trailing bouquets as they are wired, so I’m not sure Kate will pick British flowers, since she would have to use spring flowers at this time of year.

Whatever flowers Prince William and Kate decide on for their big day, I’m sure they will be fabulous.  Kate always looks very elegant and stylish.  I just hope the sun shines for them on the 29th.